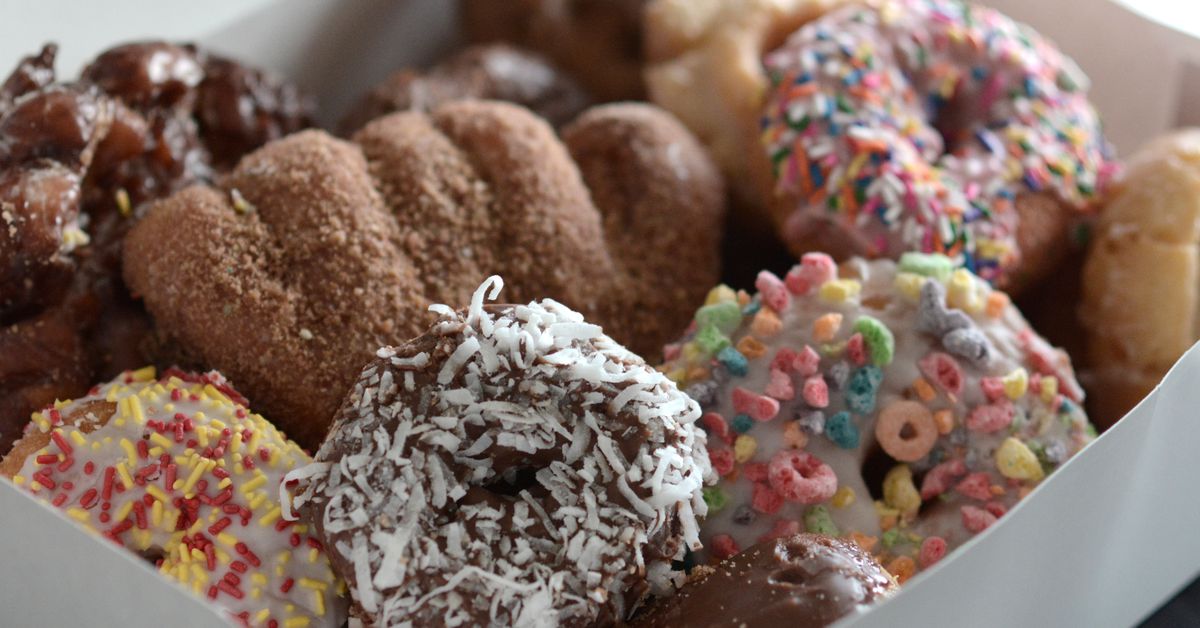 A while back, I worked at a Company That Shall Not Be Named. When I started, they had really nice (probably too nice) snacks. Then, they scrapped the snacks and got a vending machine you had to pay for. You were still allowed free fruit – but were limited to two pieces per week. Then, the mass layoffs came.

Why, I started to think, had Company That Shall Not Be Named been wasting money on snacks in the first place, especially if the budget really was so tight? Sure, pretzels at work are nice, but what is even nicer is a paycheck. Obviously, a smaller snack budget wasn’t going to save jobs, but the whole situation seemed silly.

A lot of corporate rewards are kind of bullshit.

Office snacks aren’t necessarily a scam, but they do feel scam-adjacent. If they were to go away entirely, that would probably be fine. And that might be just what’s happening anyway, thanks to the rise of remote work and a diminishing tax break for employers who provide them.

For years, many companies – especially those with fat wallets – have been engaged in a sort of arms race of office perks in order to compete for workers and keep them on board. Some of those perks and benefits are really meaningful, such as generous parental leave and solid health coverage. Others fall more on the nice-to-have list, such as on-site gyms, yoga workshops, and dry cleaning. Also on the latter list: snacks.

The pandemic has thrown some of the snack situation out of whack because more office workers have been doing their jobs from home. Now, companies are trying to lure people back to their desks with perks, including free food and snacks. Among other things, it’s a tell on what companies are trying to do, in part, with snacks in the first place: get you to work a little harder and a little longer and feel a little better about it because food, psychologically, can make people feel better. And companies get a tax deduction on what they spend on snacks to boot.

“For some offices, office snacks are considered motivation or a perk. Whenever we feel like we have some extra perks, we tend to work harder, ”said Susan Albers, a psychologist at Cleveland Clinic and author of multiple books on mindful eating. “Food can really change, shape, and adapt behavior.”

A pile of granola bars, bananas, and pretzels at the office isn’t necessarily a bad thing, but it does play a role in keeping people in the office and working when maybe they would be better off going outside, or would rather just go home. Companies can also use snacks as a potential recruitment tool, a way to say, “Look what a cool, kind place we are to work” – and it’s cheaper for a company to provide snacks than to pay employees more. Snacks are not a stand-in for more tangible, impactful benefits or higher pay. A free candy bar does not have a sufficient retirement fund make.

“Snacks should be thought of as a small tool to elevate employee experience, but it’s not a substitute for the fundamentals of creating a healthy work environment,” said Steven Rogelberg, a professor at UNC Charlotte and an expert in organizational science and management. “If an organization is fundamentally flawed and leaders are fundamentally not good leaders, snacks aren’t going to do much. Snacks can’t mask these fundamental problems. ”

Or maybe the days of office snacks should just be over, and they were never that great in the first place.

The rise of office snacks

Snacks were not always so big of a thing in the United States, in culture in general or at work. But over the latter half of the 20th century, that changed. Manufacturers were producing and sending out prepackaged snacks to the masses, and consumers were literally eating them up. From 1977 to 2002, the percentage of Americans eating at least three snacks a day rose from 11 percent to 42 percent. Snack culture spilled over to the workplace, as Jamie Lauren Keiles laid out in 2019 for the New York Times, in wheeled carts and vending machines for employees to buy from. During and after the dot-com boom, it became employers who were buying and providing snacks. You probably know the familiar startup trope: the pingpong table, the video games, beer on tap, and, of course, an array of foods that no one would call a full meal.

People like snacks, at least according to the snack industry and, also, logic. A study from snack maker Mondelez found that 59 percent of adults around the world prefer snacking to eating meals. A 2015 survey from grocery delivery company Peapod found that 67 percent of workers who had access to free food said they were “extremely” or “very” happy with their jobs compared to 56 percent of workers overall.

Rogelberg said his research shows that one of the best predictors of satisfaction with a meeting at work is having snacks, though he clarified it’s not really about the snacks in and of themselves. “It’s more of a fact that the leader is taking the time to try to do something nice for the people, and that they are signaling some intentionality,” he said.

I’m not going to lie, getting a donut will probably make me feel better about a meeting. That doesn’t mean said meeting maybe couldn’t have been an email, or that I couldn’t have done without the donut.

Office snacks are tax deductible for employers. Prior to the Tax Cuts and Jobs Act of 2017, they were 100 percent deductible; now, that’s been cut down to 50 percent. Snacks are considered what’s called a de minimis fringe benefit, and there are fewer limits around tax deductions for them compared to other employer-provided meals.

“What they’re spending on the purchase of snacks, the employer right now is allowed to deduct 50 percent of the cost of the snack unless the snack is coming from a restaurant,” said Kathryn Bjornstad Amin, partner at Groom Law Group. “Employers were not happy about that, the 50 percent cut.”

Still, it’s better than nothing. Bjornstad Amin added that the tax deductibility for snacks for companies will be eliminated entirely in 2026. “They might not want to purchase the snacks for employees if they can’t deduct it,” she said. “It might still be worth it to provide snacks to employees for other reasons, that’s worth more than the deduction to them.”

Most of the experts I spoke to for this story agreed on one thing regarding snacks: Part of the point is to get workers to stick around in the office. “It lends itself to staying in the office longer and more of a face-time kind of culture,” said Kyra Sutton, an assistant professor of human resource management at Rutgers. “The goal would be to make work as comfortable and as convenient as possible, kind of creating a home setting in the workplace so that you have less to worry about and you have readily available snacks.”

If there’s food available, really whatever it is, it lets people stay in the office instead of going out to get something, and maybe they even turn the snacks into lunch. At the end of the day, if they’re hungry, a snack might get people to stick around a little longer. Employer-provided snacks can be a nice money-saver for workers who don’t want to spend on food while on the job. Of course, companies could pay them more as well.

There is some evidence that snacks can improve performance and productivity at work, though as Monica Torres outlined in HuffPost in 2019, the evidence is more mixed than you’d think. Not all snacks are created equal. A 2011 study found that snack foods such as chocolate and cookies were associated with higher stress and more cognitive failures at work. A 2014 study found that people snacking on fruits experienced lower anxiety, depression, and stress compared to those snacking on chips and chocolate. If you have ever worked in an office, I probably do not need to tell you that a lot or even most of the snack options are not exactly the ones you’d find at the health food store.

Stress, including at work, can cause people to overeat; not a good thing. One study found that when layoffs were coming at one New York manufacturing company, workers were draining the vending machines of high-calorie and high-sugar snacks. Albers said she always encourages people to eat “mindfully” and to try to make sure “they’re not using those snacks for stress reduction.” But if you’re in a high-stress work environment, mindful eating can be easier said than done.

“Often, office snacks are high-sugar and don’t create a lot of nutrients. Often, they’re also placed in a location where people have to get up and walk to. That can be a good thing, or it can also produce some mindless eating and weight gain and promote some procrastination as well, ”Albers said. “Food tends to make people happy. It hits the dopamine in the brain – but there are a lot of other non-food perks that businesses can incorporate. ”

As companies look to get workers back into the office, snacks and food are part of the playbook. It’s not a terrible idea, but it’s also not necessarily what workers value most from employers. One survey from Envoy of workers who have gone back to the office found that office perks like free food ranked low on a list of advantages of returning. What ranked higher: separating home life from work life, collaborating in person, seeing work friends and managers, and better wifi.

I’m not saying office snacks are the devil. (And maybe I’m just the office snack grinch!) Of the ways companies try to get employees to work longer and harder and feel better about their jobs without having to do much, snacks are just a small factor. Some firms pay for dinner, but only if you stay until a certain time. Or they’ll put gyms and massages and dry cleaning services on the premises, which again, sure, fine, but maybe everyone would be fine just working out without their coworkers around, and leaving the premises to do so. And all of these perks should not overshadow what really makes a workplace good: good pay, reliable benefits, a safe environment. A couple of years ago, I talked to a Family Dollar worker who said the corporate had sent her store cookies at the outset of the pandemic while the workers waited for sneeze guards. I think about it a lot.

If work-from-home and a dying tax deduction are the death of office snacks, it won’t be the end of the world. They were never that great in the first place.

We live in a world that’s constantly trying to sucker us and trick us, where we’re always surrounded by big and small scams. It can feel impossible to navigate. Every two weeks, join Emily Stewart to look at all the little ways our economic systems control and manipulate the average person. Welcome to The Big Squeeze.

Have ideas for a future column? Other work “perks” you don’t feel are great? Email emily.stewart@vox.com.