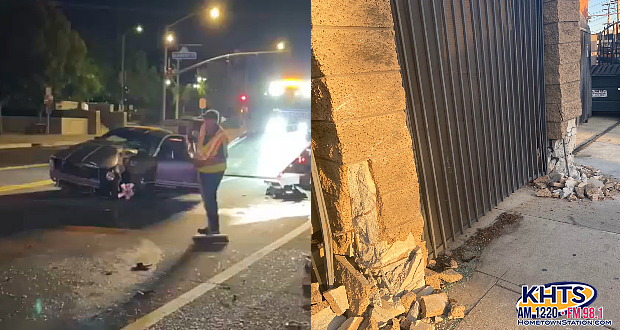 An alleged DUI crash that occurred late Friday night caused thousands of dollars in damage to KHTS Radio in Newhall after a car was sent careening into the structure.

At about 10:17 pm Friday, emergency responders received reports of a traffic collision near the intersection of Railroad Avenue and Market Street in Newhall, per Los Angeles County Fire Department officials.

Witnesses at the time alleged that at least two vehicles had been seen street racing in the area in the moments leading up to the crash, according to information passed to KHTS owner Jeri Serrati-Goldman.

“(We were told a) DUI driver ran into the fence behind KHTS on Railroad,” Serrati-Golman said in a video taken Saturday morning. “Our brand-new electric gate, I can not even shut it.”

Multiple concrete pillars and the new electric gate, which had only recently been installed, sustained major damage, costing “in the thousands,” according to KHTS owners.

At least one other vehicle, identified as an SUV, is being sought in connection with the incident

KHTS is asking for anyone with information on the incident, the vehicles involved, or the occupants to contact the radio station or law enforcement.

Do you have a news tip? Call us at (661) 298-1220, or send an email to news@hometownstation.com. Don’t miss a thing. Get breaking KHTS Santa Clarita News Alerts delivered right to your inbox. Report a typo or error, email Corrections@hometownstation.com

KHTS FM 98.1 and AM 1220 is Santa Clarita’s only local radio station. KHTS mixes in a combination of news, traffic, sports, and features along with your favorite adult contemporary hits. Santa Clarita news and features are delivered throughout the day over our airwaves, on our website and through a variety of social media platforms. Our KHTS national award-winning daily news briefs are now read daily by 34,000+ residents. A vibrant member of the Santa Clarita community, the KHTS broadcast signal reaches all of the Santa Clarita Valley and parts of the high desert communities located in the Antelope Valley. The station streams its talk shows over the web, reaching a potentially worldwide audience. Follow KHTSRadio on Facebook, Twitterand Instagram.