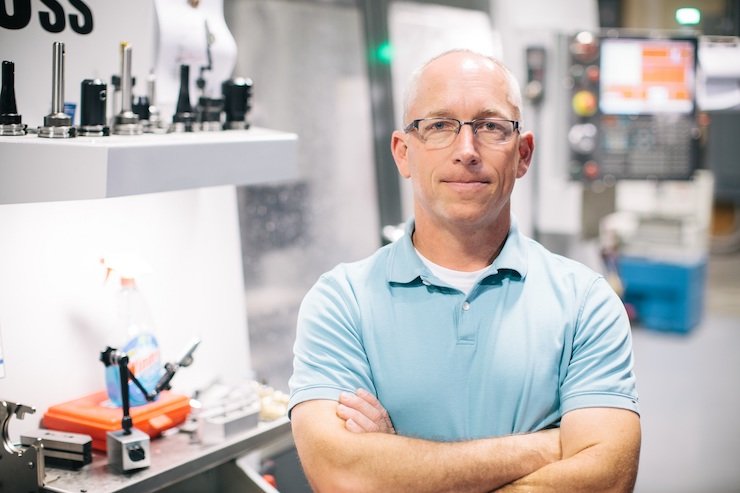 These were the final words out of the mouth of Chuck Hull – the founder of 3D Systemsthe inventor of Stereolithography (SLA) and the ‘father of 3D printing – upon accepting his induction into the TCT Hall of Fame in 2017.

It came 34 years after he produced the first part on his SLA process, which he would patent in the mid 1980s before setting up a company that remains among the leaders in its fields. His encouragement to the rest of the industry was born from a love of innovating, but also a recognition that there was still more to do within the additive manufacturing industry for the technology to reach its potential.

The innovations that need to keep coming – for 3D Systems at least. as per Hull’s colleague David Leigh – is sustaining innovation rather than the transformative ones that kicked things off.

Leigh, who was appointed to the role of CTO at 3D Systems last summer, speaks to TCT at AMUG 2022 where the company announced the launch of its SLA 750 and SLA 750 Dual 3D printing systems. These machines feature several enhancements of older 3D Systems SLA machines, such as a greater number of lasers with higher power, to ensure they are more productive. 3D Systems has equipped the machines with a 750 x 750 x 550 mm build volume, a proprietary scanning algorithm designed to optimize laser focus and power, a vector motor kinematics to deliver improved print speed and throughput, and a self-calibrating dual-rail recoater to improve reliability and mechanical properties.

With the Accura AMX Durable Natural resin and PostCure 1050 post-processing station being launched alongside the SLA 750 systems, last month’s launch also represented another step in the direction of offering platforms as opposed to just machines.

“We’re going to be releasing a new curing oven that can pair with it so that way you can tune your cure to get better mechanical properties. We’re launching new resins that can go with the enhancements before and the legacy systems probably wouldn’t have been productive enough, these resins take more power to be able to run, ”Leigh told TCT. “We’ll start seeing more resins, upgrade paths from one laser to two lasers, so that way, when you buy a system, you’re future proofing it. If we want to scale and do the best, [we] not only [need to] make the machine better today but allow it to be better tomorrow. That’s the platform play. “

It’s also the sustaining innovation play, whereby small but several developments are made to push the product forward.

“The temptation is we need a transformative innovation. The reality is we need a sustaining innovation, ”Leigh said. “It’s a good platform, it needs to tweak. We’ve deconstructed it, put it back together and put in the architecture and the features, like a vat that’s removable, blade that’s calibrating, multiple laser options. All these kind of things that are not transformative ideas, those are sustaining ideas, but we put a bunch of them together, so it took a little longer. What we’ll do is we’ll take this as a start and then coming forward, we’ll do a little bit more. ”

Through the SLA 750 platform launch, 3D Systems expects not to create new applications, but enable existing ones to scale. This could mean parts may be cheaper, have less scrap, or be made with a higher throughput than before. For 3D Systems, product developments like this are about increasing value, while making the technology more affordable to adopt and apply – maintaining their margins, while improving the margins of their customer base.

“It is never our goal to sacrifice our customers’ margins for the benefit of ours,” Leigh said. “The best way we can do that is through innovation, so we can allow ourselves to maintain margins and allow our customers to increase theirs. And the way we do that is to scale, for the most part, existing applications. There’s not a feature on [the SLA 750] that’s new to the world. I will say our oven is different – it’s a multi wavelength, so you can tune it, it’s not just light, it’s heat and so we can tune the curing and we think that we can get some unique mechanical properties. This machine itself will not open up new avenues, but it’ll be a platform that, if we can innovate with new materials and pair it with this machine, then it becomes a materials play. So, materials is a significant part of our business and our strategy, and so we hope to bring to bear some significant materials over the coming years. ”

Embracing a philosophy of sustaining innovation within its core 3D printing and additive manufacturing offering is what brought Leigh to 3D Systems in June last of year. It came as Hull, who previously held the position, took up the role as CTO of 3D Systems’ Regenerative Medicine efforts. This, per Leigh, was a shake-up that suited both he and Hull, with the former said to be more comfortable employed as an ‘operational theorist’ sat in lots of meetings, as well as working with organizational charts and process controls, and the latter still willing and eager to work in the incubation stage.

As he approaches one year since he’s been in the job, it’s not a role Leigh expected to be working twelve months ago. Early in his career, Leigh worked for four years at DTM Corporation which would be acquired by 3D Systems, before founding service bureau Harvest Technologies which was later taken over by Stratasys. At Stratasys, Leigh landed a role in its Emerging Technologies division, where he would work on the Vulcan Labs project, which was spun out and then acquired by EOS months later. He would eventually be appointed to COO and then CTO of EOS North America, before resigning because of a ‘spiritual, emotional something’ that affected him during the pandemic.

Leigh was keen to point out that he left his position at EOS without his next career step in mind. What happened in the interim was that, as they settled into their seats at the top of a leading additive manufacturing firm, 3D Systems ’new management team, headed by Dr Jeff Graves, took the time to engage with leading figures in the industry. One of them was Leigh.

“They said, ‘Hey, would you be willing to consult for us?’ So I flew out to 3D Systems during the month of June [2021] and we talked about consulting, ”Leigh explained. “By the end of the conversation, they said, ‘hey, would you be interested in joining us and being our CTO?’ For that reason, it was hard to turn down, but I just left one, so why now? Part of it is, I worked at DTM, which was acquired by 3D Systems and I’m now working with people that I worked with when I was a kid. So, my first day out of college I came to work with people like Brian Carr, who’s in our applications group, and Mary Michalewicz, who’s also in our applications group. They’re these people that I have known my whole career and now I’m working with them again. There’s this weird synergy or symmetry to come back home.

“[Additionally], the management team has been committed to do whatever it takes to get 3D Systems where it goes, and not whatever it takes in a negative way, whatever it takes in the right way. They’ve given me the autonomy to do the things that I think are necessary to lead 3D Systems in a technical way. I think we’ve relinquished our technical leadership to more startups because we’ve been focused more on go-to-market and making money than making changes in the technology that we use. So that’s my piece of the pie in the responsibilities of the organization is to take the things that need to be on the truck and make sure that they’re the things that need to be on the truck. We can’t just fix it through sales and marketing, we need to look at the core. ”

A refocusing on the core is a strategy put in place by 3D Systems President and CEO Dr Jeffrey Graves, who was appointed in 2020. The plan to hone its focus on additive manufacturing again was made public as 3D Systems sold off its On Demand Manufacturing, Cimatron and Simbionix businesses, and has been reinforced with the appointments of Dr. Brent Stucker as Chief Scientist and Leigh as CTO. And having caught up with the many goings on inside an additive manufacturing leader, Leigh, with his aforementioned autonomy, has boiled down his remit to this:

3D Systems will be exhibiting at the upcoming RAPID + TCT event in Detroit from Booth 2613.

Want to discuss? Join the conversation on the Additive Manufacturing Global Community Discord.

Get your FREE print subscription to TCT Magazine.

See the latest additive manufacturing and 3D printing developments in person by joining us at RAPID + TCT in Detroit on 17-19th May and at TCT 3Sixty in Birmingham, UK on 8-9th June.