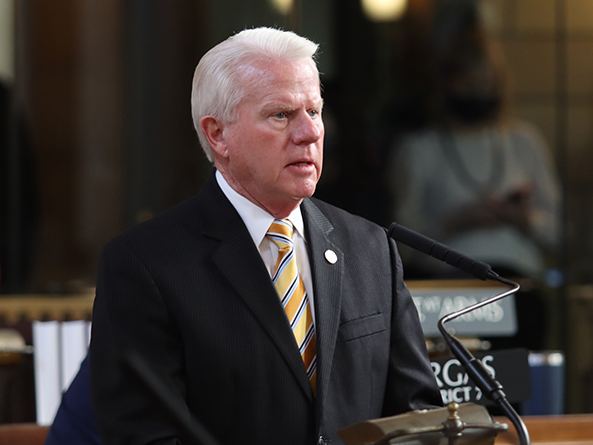 Pharmacy benefit managers, clinician-administered medication and expanded Medicare eligibility topped the list of issues heard by the Banking, Commerce and Insurance Committee and addressed by the Legislature this session.

Among other provisions, the bill:
• establishes an audit process for pharmacies;
• allows the DOI director to audit a PBM and assess penalties of up to $ 100,000 per violation;
• prohibits a PBM from charging any fee, chargeback or other adjustment to any pharmacy participating in the federal 340B drug discount program;
• requires PBMs to update the maximum allowable cost price list at least every seven days;
• prohibits PBMs from excluding a pharmacy from participating in the PBM’s network if the pharmacy holds a specialty pharmacy accreditation; and
• prohibits a PBM from restricting certain actions by a pharmacist, including disclosing to a client the risks of treatment, informing a client of alternative treatments that may be available, describing the process used to authorize or deny a service or benefit and disclosing the financial incentives used by a health carrier.

Lawmakers also approved an omnibus bill that makes a number of changes to laws governing insurance.

LB863, introduced by Gothenburg Sen. Matt Williams, mandates the filing of group capital calculation and liquidity stress test results with the Nebraska Department of Insurance by insurers subject to the registration requirements of the Insurance Holding Company System Act.

The bill, passed 46-0, includes provisions of six additional measures:
• LB728, introduced by Omaha Sen. Brett Lindstrom, which creates a state administered statutory framework for the sale of travel insurance and subjects individuals who sell travel insurance to the Unfair Insurance Trade Practices Act;
• LB737, introduced by Lincoln Sen. Eliot Bostar, which creates the Primary Care Investment Council to analyze, among other data, spending and investment on primary care services in comparison to health outcomes in Nebraska and nationally;
• LB739, also introduced by Bostar, which lowers the health insurance coverage age for a colorectal cancer screening from 50 to 45;
• LB955, introduced by Sen. Dave Murman of Glenvil, which prohibits the denial or reduction of coverage for life, disability or long-term care insurance or the charge of an additional premium for living organ donors in Nebraska;
• LB957, introduced by Sen. Michael Flood of Norfolk, which requires that all Nebraska domestic insurers regulated by the state establish standards, requirements and limitations for the investment of insurers; and
• LB1042, introduced by Bostar, which provides guidance to insurance companies regarding gifts and other related activities.

LB943, introduced by Bostar, would have prohibited certain health insurance coverage restrictions on medication that is administered by a clinician. The bill advanced out of committee but was not scheduled for general file debate this session.

Two other bills did not advance from committee.