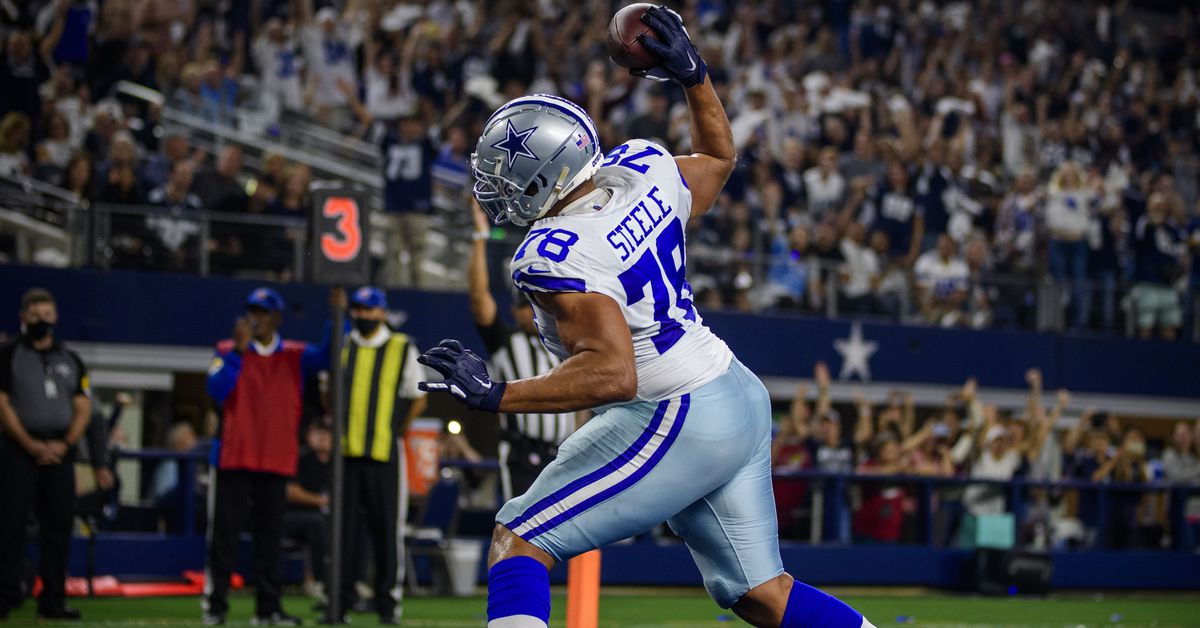 The whirlwind of free agency and the draft is winding down. The dust has settled. And with it, the 22 players that are likely to start for the Dallas Cowboys this upcoming season are officially on the roster.

For 50% of Dallas’ roster, there is no question about their ability to produce. Players such as Tyron Smith, Zack Martin, Dak Prescott, Ezekiel Elliott, and even Leighton Vander Esch have a small area between their ceiling and floor. Most fans know what they are getting with these players.

Then there is the 50% of the players that are young and their ceiling and floor are unrealized. But the Cowboys are likely not relying on them to be major contributors in 2022 unless they were taken within the first three rounds.

From undrafted free agent to the unquestioned starting right tackle. When the Cowboys released La’el Collins, there was some understanding given how much he was being paid. And in reality, Terence Steele is a comparable right tackle to Collins and is making a fraction of his salary. Tyler Smith won’t threaten Steele’s job as they likely move the rookie to the left guard for the upcoming season.

However, if Tyler Smith proves worthy of the first-round selection, Steele is the weak spot on the offensive line. Of the ten offensive linemen who played at least one snap for Dallas in 2021, Steele was the second lowest-graded player by PFF. He finished just ahead of Brandon Knight, who played three snaps.

But this is not to disparage Steele or presume that he cannot fulfill the job in 2022. The issue is that, after letting Collins go, their backup right tackle candidates are Josh Ball, Matt Waletzko, and Isaac Alarcon. What do all three of those players have in common? They have never played a snap in the NFL.

This means that if Steele cannot progress from last season and be the right tackle that the front office assumes he can be, you have to hope that one of the young linemen step up.

Terence Steele has, at times, proved he can be a somewhat reliable starting right tackle. But there are also some moments that suggest otherwise. Regardless of what happens, the front office is pushing their chips in on Steele being the guy in 2022.

Jabril Cox projects to be a major contributor in 2022. Some are optimistic about what Cox’s athleticism means for the defense. But regardless of how you feel about Cox, there are a lot of question marks surrounding the fourth-round pick from 2021. But those questions will be answered as he is set to be an integral piece on a thin linebacking corps.

The chase down of Daniel Jones last season was an outstanding play. But it was also just one of his nine plays for Dallas in 2021 before his season ended early. Dallas is walking into 2022 hoping that a player with one career tackle can replace Keanu Neal.

The current depth chart behind Cox is Luke Gifford who contributes more on special teams than anything, and then two rookies in Damone Clark and Devin Harper, and the former is likely to miss time next season.

So if Dallas wants to use Micah Parsons on the edge, or if Vander Esch needs a breather, Cox is the next man up. He will replace the 579 snaps vacated by Keanu Neal.

Granted, there is upside with Cox. But the front office has done nothing to address LB this season and thus that upside has to manifest itself. Otherwise, they are left with essentially no replacement. Maybe he is the player that fans hope he can be, but it is still a gamble to walk into the season assuming that he hits his ceiling. Cox has to improve and stay on the field in 2022 for this linebacking corps to work.

Hoping that Tyler Biadasz improves applied to 2021 just as much as it does this season. And while the former fourth-round pick did improve last year, he needs to take another jump.

Biadasz filling his respective position is a safer proposition than the other two names on this list. He started in all seventeen games last year and his PFF grade jumped twelve points from his rookie season in 2020.

But despite the improvement in his play, he still fell below the league average among starting centers by PFF grading. He is better at pass protection than run blocking, and he still deals with inconsistent snaps that make Dak Prescott’s job more difficult. And while he is one of ten centers that allowed less than two sacks on the season, he led all centers with eleven penalties. And his 17 quarterback hurries allowed was the ninth highest at the position.

But the improvement from year one to two is there for Biadasz, as he took over the full-time role in 2021. However, similar to last year, the Cowboys are heavily relying on him to take the next step.

Dallas did not draft a center despite Tyler Linderbaum being available at the 24th pick, and they did not add a backup in free agency. Meaning that the current depth chart at center is Tyler Biadasz, and the guard Matt Farinok. There is also UDFA Alec Lindstrom.

While the front office might not be relying on Biadasz to improve as much as the Cox and Steele, they are relying on another full seventeen game season from the center. This is never a given in the NFL, regardless of what happened last year.

Jerry Jones and the front office are not shying away from risk in 2022. They are betting on several players to step up and stay healthy, as evidenced by a shallow depth chart behind them.

If it works, then Biadasz, Steele, and Cox would all provide help at needed positions next year. If it doesn’t, then fans have to hope that other young players can step up. But for now, the Cowboys are confident in the first situation.